In raw number stats, 255.3 million Android handsets were sold in the second quarter. Compared to iOS, Apple only shipped 35.2 million iPhones, but this is the worst quarter for Apple, before the launch of the next iPhone.

iPhones and Android handsets accounted for 96 percent of all mobile shipments in the second quarter. This is bad news for Microsoft, trying to keep Windows Phone alive. The Windows Phone share has dropped from 3.4 percent to 2.5 percent year-on-year.

For BlackBerry, the numbers look even more dismal, dropping from 2.8 percent to 0.5 percent market share. It looks like BlackBerry is officially out of the game, like Symbian and other older mobile platforms.

The Android sales mostly come from Samsung, who continue to dominate the Android platform. In 2014, Samsung has dropped year-on-year sales in the mobile market by 3.6 percent, allowing Lenovo, Huawei and Xiaomi to grab more market share. 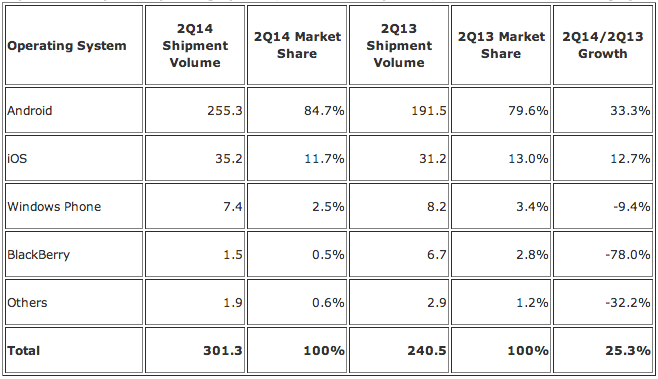 India and China are the two real contributors to Android’s continued growth, in 2014 analysts project 300 million sales from China alone, around half for India. Xiaomi, the most popular smartphone manufacturer in China at the moment, shot from 1.4 percent market share to 6.8 percent in a year.

The future looks to continue the Android growth trend, we doubt China will be adopting iOS massively any time soon, unless we get an iPhone 6C and Windows Phone has failed in all aspects to grab the Chinese and Indian market.

What could change in the next few years is Samsung’s dominance. More people are switching to Xiaomi, Lenovo and Huawei in China and India, the two largest markets, and Xiaomi is looking for global expansion.

Samsung will be hard pressed to match the prices Xiaomi puts on their flagship devices. In India, it it even harder for Samsung, who have to compete against extremely cheap devices made for the budget end.

This sort of localisation of mobile manufacturers appears to be a growing trend in developing countries. Samsung, HTC and LG may continue to be the best in the UK and US, but in India and China it looks like they are losing out to local competitors.