The PlayBook is a beautiful machine with an imperfect suite of apps, showing immense potential that could be realised with updates in the coming months.

Note: It is available in 32GB and 16GB variants. 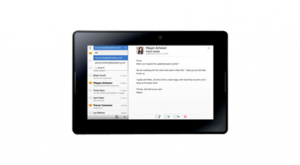 Though firmly in its infancy, tablet computing already has acknowledged boundaries of design in place, and RIM doesnâ€™t verge too greatly from the flock. The PlayBook is a 7-inch tablet of about the same size and weight as Samsungâ€™s Galaxy Tab, but with a more premium quality finish overall. Unlike the Tab and Appleâ€™s iPad, the PlayBook has a flat surface on its underside, which, paired with its soft-touch plastic cover, gives the PlayBook a better grip.

RIM chose a 7-inch 1024×600-pixel resolution TFT LCD display for the PlayBook, and itâ€™s superb. Although thereâ€™s no OLED or IPS tech in play here, the PlayBookâ€™s display is sharp and colourful, and has excellent viewing angles. The screen has a large black bezel running around the edge which, unlike other tablets, is actually part of the capacitive touch area of the screen, and is an integral part of the PlayBookâ€™s button-less navigation â€” but more on that later.

External ports and sockets are kept to a minimum on the PlayBook. Along the bottom youâ€™ll find a micro-USB port, a micro-HDMI port and a proprietary fast-charging port for use with the optional PlayBook Dock. The good news is that, unlike most tablets weâ€™ve seen this year, the PlayBook can charge using a USB cable plugged into your PC â€” albeit very slowly. On the top of the tablet is a Power button, which is beside some basic music controls. 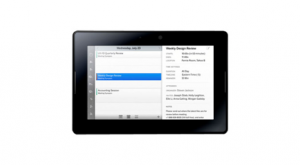 What really sets the PlayBook apart from the rest of the pack is the way that you interact with it. Like tablets running Googleâ€™s Honeycomb, there are no physical navigation controls on the PlayBook, but while Honeycomb tabs use software keys to move around the tablet interface, RIM has opted for something much cooler. All basic PlayBook navigation is handled by swiping gestures, which include the touch-sensitive screen bezel. Swiping up from the bottom bezel acts like the Home key on mobile devices, and returns the user to the main menu; swiping from the left or right sides switches between active apps, and swiping down from above opens a context-sensitive menu within each app.

These controls, matched with the performance of the BlackBerry Tablet OS, are the best parts of this product. The PlayBook is fast and attractive, and is a pleasure to use. There are a few bumps in the road, however. For example, the onscreen keyboard needs a few tweaks to give this tablet the famous BlackBerry typing experience. Although the keys are well spaced and the screen is responsive, the keyboard doesnâ€™t have any auto-correction software attached, so you will have to self-edit and manually correct your messages as you go. This is one important area of the tablet experience that Apple and Google have both got right from the start.

The userâ€™s ability to interact with the tablet feels limited, too; the device settings are sparse and there is no file manager on the PlayBook to examine user-accessible content. Like the iPad, content (photos, videos, documents) is only visible within the apps that it corresponds with, like images in the Gallery. There are several File Manager apps that you can buy on the App Store, but the absence of one pre-installed by RIM is an obvious limitation.

Apps, or the lack thereof

With such a slick and sexy user experience, some people will be disappointed with what you are able to do with the PlayBook out of the box. When you first power up the PlayBook, youâ€™ll be able to browse the web (complete with Flash built-in), log-in to Facebook, browse YouTube, watch videos and play music. Thereâ€™s also a Kobo ebook reading app, Bing Maps, an excellent Podcast app and two games: Tetris and Need for Speed: Undercover. If you know someone else with a PlayBook, you can also video chat over a Wi-Fi connection.

This may seem like a long list of pre-installed tools and entertainment, but there are notable absences. There is no email or calendar app, and no contacts database, a major oversight for a tablet pitched at a professional market. RIM seems to have left these tools out intentionally, guiding users to use its BlackBerry Bridge software. Bridge connects the PlayBook to a BlackBerry smartphone over Bluetooth, and creates a secure ad-hoc network, which shares the contacts, email and calendar stored on your handset. Icons for these apps appear on the PlayBook when connected, and disappear when you disconnect. The Bridge concept works well, and is a great idea for the security-conscious professional who currently uses a BlackBerry, but it leaves everyone else out in the cold.

If you want to supplement the apps installed on the PlayBook out-of-the-box, you can jump onto BlackBerry App World and start downloading. Apps for this new tablet are growing quickly in number, with current BlackBerry developers porting over old apps and Flash game designers repackaging web-based titles. There are also some fantastic apps designed specifically for the PlayBook and its high-resolution display.

This is the state of play at the launch of the PlayBook, but it isnâ€™t the end of the story. In May, RIM announced that it would deliver dedicated email, calendar and contacts apps in an update before the end of August. It also announced the development of an Android app player for PlayBook, making it possible for Android app developers to submit their completed apps to the BlackBerry App World â€” apps that would run like native PlayBook apps once a user downloaded them. If Android developers take advantage of this opportunity, the PlayBook apps catalogue could grow exponentially. But the question is: will you buy a PlayBook based on the promise of future updates?

Multimedia and the web

While the PlayBook may not satisfy your basic work needs yet, it does offer some very good ways to spend your weekends. The video player is great, with support for DivX and XviD alongside standard formats like H.264 and WMV. Having the HDMI-out option on-board is a huge plus, too, with the PlayBook capable of dual-screen modes. This is great for entertainment, but is also a boon for professionals who give presentations as part of their work. You could, for example, run a PowerPoint presentation off the PlayBook, and display readerâ€™s notes on the tablet and your slides on the external display. You can also switch to a video without your audience watching you fumble through the menus. 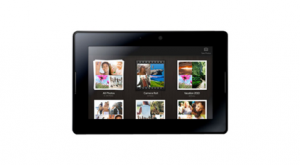 Web browsing is the centrepiece of the PlayBook, as it is with most tablets. RIM calls this a â€œfull web experienceâ€, and itâ€™s easy to see why. Not only is Flash content available in the browser, but interacting with this content is very similar to using a desktop computer, minus the mouse. Videos load quickly in their fragments on a page, and you can use the standard video player controls as you would on a desktop computer.

Generally, the web browser is good, but itâ€™s not the fastest weâ€™ve seen, and it doesnâ€™t have a â€œmobile viewingâ€ option to automatically load mobile versions of pages and save time and data. Compared with other tablets, the PlayBook earned a lower score on the BrowserMark benchmark, suggesting sluggishness with its JavaScript execution â€” something that may be revisited in a later firmware update. In the meantime, you can turn off JavaScript elements in the browserâ€™s settings. This made a huge difference in loading the pages that we prefer to visit.

Itâ€™s also worth noting that the PlayBook is a Wi-Fi-only device for now, although RIM has suggested that it will release 3G versions of the tablet towards the end of the year. The PlayBook should be able to jump onto just about any common network, supporting the 802.11a/b/g/n protocols.

When you compare the PlayBook with most other tablets on the market, RIM has one serious ace up its sleeve: the tablet is built around the software, and vice versa, so the execution is mostly flawless. RIM opts for similar hardware to Appleâ€™s iPad 2, with dual-1GHz Cortex-A9 processors, 1GB of RAM and a PowerVR SGX540 dedicated graphics processor. The results are phenomenal, with smooth animations across the system, and best-in-class multitasking. The BlackBerry Tablet OS manages each process separately, so, in theory, a dodgy app should never crash the system. Weâ€™ve been using the PlayBook now for nearly two months, and weâ€™re yet to see a crash. 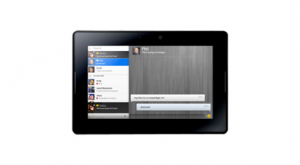 Battery life is also excellent, as it is with most BlackBerry products. The PlayBook has a non-user-accessible 5300mAh battery beneath the screen, and it is capable of 10 hours of continual use, according to RIM. We saw this sort of result with each charge, and we were also impressed with the extended standby time that we got out of a charge, as well â€” a factor that is be greatly assisted by the lack of 3G connectivity.

With its slick design and solid performance, the PlayBook feels like a sports car, but its lack of common applications makes it feel like a Ferrari that youâ€™ll only drive to and from the shops. Sure, many of the apps that are missing can be accessed through the web browser, like web mail services, but this is a poor substitute for a well-designed, touchscreen-friendly application.

The good news is that all of our quibbles are software-related, and BlackBerry has committed to frequent firmware updates. Since its US release in May, RIM has pushed out three major updates that have included features like Video Chat, Office document editing and a dedicated Facebook experience with video uploading. RIM has also committed to adding two key features in the next few months: dedicated email, calendar and contacts apps and an Android app player that will let Android developers publish their apps on the BlackBerry App World â€” a move that could quickly add tens of thousands of apps to the platform.

Until these features are in place, youâ€™ll need to assess your usage carefully before picking up a PlayBook. If you plan to use it on the move, youâ€™ll need a portable Wi-Fi connection, like a BlackBerry or Android phone or a mobile broadband Wi-Fi hotspot. If you want business email and calendar, youâ€™ll need a BlackBerry handset and an active BIS or BES account (for now). The PlayBook is a good web browser and a first-rate media player, but while the hardware is top notch, the software is definitely a work in progress.