Will Grigg’s on fire, according to the new HTC 10 Emoji Awards. The Wigan and Northern Ireland striker who caused a stir across Europe with his famous chant may not get to number one in the charts, but he ran away with the award for the most ‘Flame’ emojis, even though he hasn’t played a minute of competitive international football in this summer’s tournament.

The awards detail the footballers who are most loved, hated or ‘on fire’, through the power of ten emojis used in social media alongside their names.  Will Grigg also won the award for the most ‘Sleeping Face’ emojis, with fans suggesting he probably fell asleep after being sat on the bench for the whole tournament.

The HTC 10 Emoji Awards is the first of its kind and has looked at how fans use emojis to describe some of Europe’s top players at this summer’s tournament. Over 10,000,000 emojis, including every heart, flame and poo were tracked from global tweets around European footballers since June 10th. The winners have all been sent a one-of-a-kind trophy, with their emoji engraved on the back of the all-metal unibody of HTC’s latest flagship HTC 10 phone.

The player with the most emoji mentions across Europe since June 10 was Cristiano Ronaldo, with an incredible 903,493. The Portuguese preener and three times World Player of the Year also won the award for the most ‘Tears of Joy’ emojis undoubtedly linked to him producing the goals at vital moments to help Portugal to the final.

French star Antoine Griezmann was the home nation, and the rest of Europe’s most loved player, having received the most ‘Smiling Face with Hearts for Eyes’ emojis. As the top scorer this summer and with a vital two goals against Germany this is surely down to his good performances and not simply his good looks… Kingsley Coman proved that lightning really does strike the same place, well country, twice with the Bayern Munchen winger getting the most ‘Lightning’ emojis used with his name, perhaps due to his lightning pace.

England players were also recognised, but not for good reasons with Joe Hart achieving two awards, the ‘See No Evil’ award and the ‘Pile of Poo’ award following his unfortunate lapses against Wales and Iceland. In fact, England fans were pretty disappointed with their team’s performances overall, with five England players, including Harry Kane, Jordan Henderson, Raheem Sterling and Jack Wilshere in the top ten with the most ‘Pile of Poo’ emojis.

Your defence is terrified

Unfortunately for Northern Irish fans it was actually France’s Paul Pogba who got defences and fans the most terrified, with his direct approach and influential passing game giving him the most scared face emojis. At the other end of the spectrum Portuguese veteran Pepe was voted the sickest player, perhaps due to some rather Hollywood-worthy performances when trying to get opposition players in trouble. 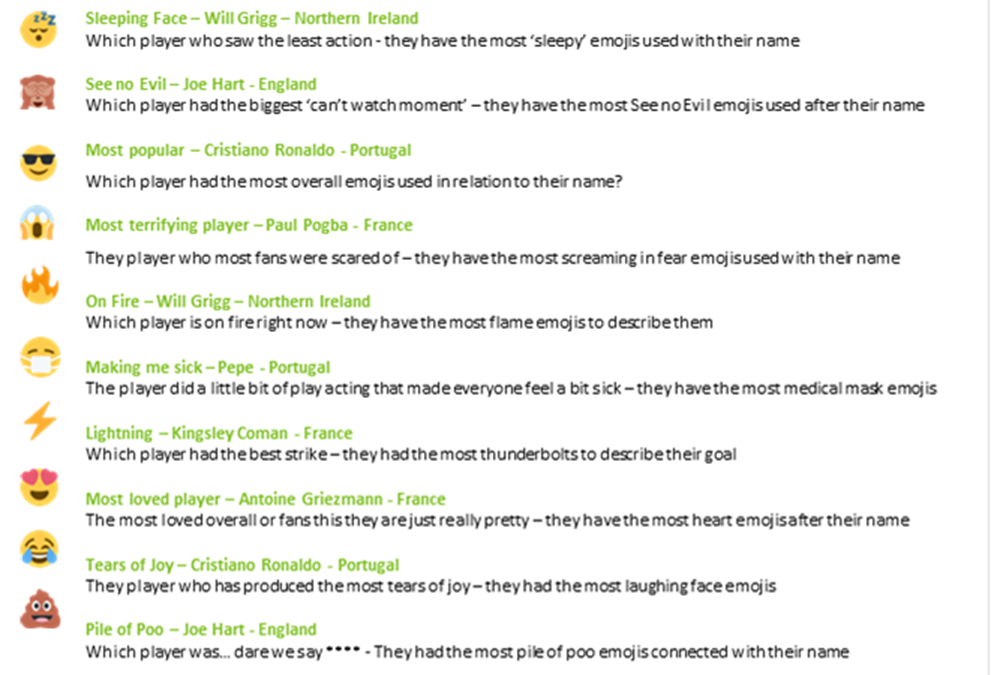 The awards were inspired by the HTC 10 – HTC’s flagship handset that comes with an impressive PowerBotics system that reduces your battery use by 30%. This combined with its 3.0 Rapid Charger which charges your phone to 50% in 30 minutes, means you’ll never be caught short when tweeting about your favourite players throughout the game.

Complete with a knock-out unibody aluminium design, the world’s first optically stabilised, larger aperture f/1.8 lenses on both its front and rear cameras and 24-bit Hi-Res audio recording (another first), the HTC 10 is the clear winner for anyone who wants a mobile phone that combines both style and substance.