In a time where we have phablets and what was once classed as the normal phone size is no longer what we know them to be; most smartphones are now 5-inch or more and even then, manufacturers are stretching out the displays to keep the form factor as small as possible.  I have two smartphones and both have big enough display for me to question the need for a tablet device.

Having said that, however, people who love to type on the move or want a dedicated media consumption device won’t be disappointed with the MediaPad M5, whether you go for the 8.4-inch version or the bigger 10.8-inch Pro version which comes with a stylus or smartpen.

The MediaPad M5 is slick and has a vibrant display that will make watching movies or editing documents very enjoyable, it’s definitely a worthy alternative to the iPad Mini and probably today’s Nexus 7 tablet that was once my favorite. 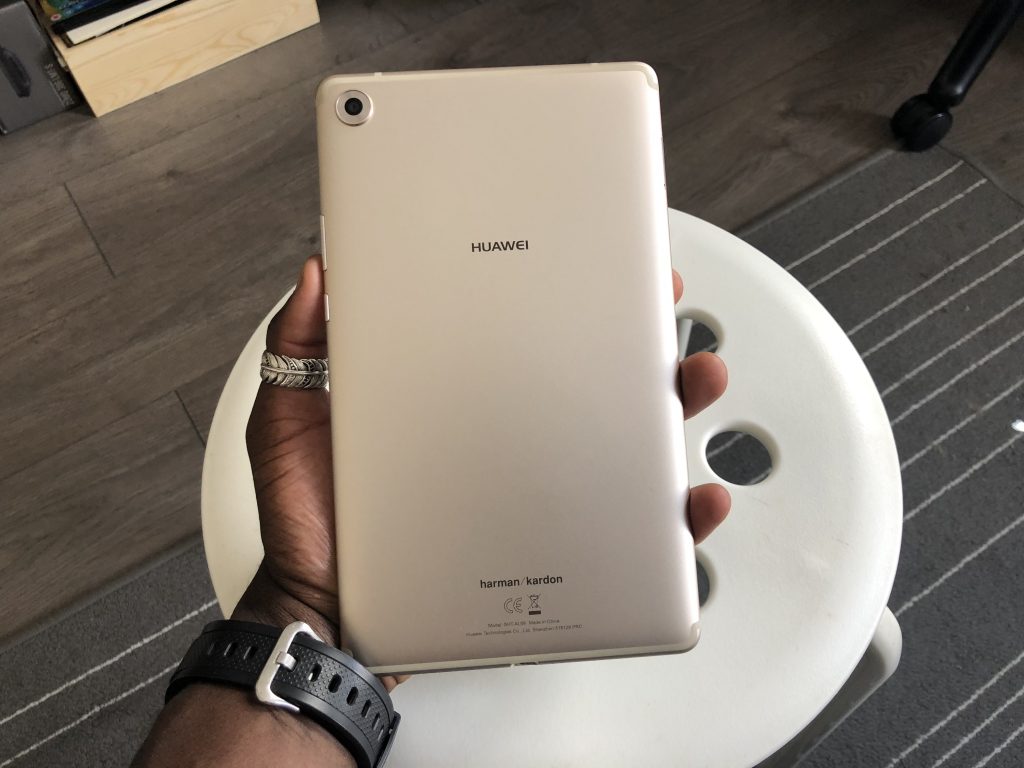 To justify its media consumption claims, the MediaPad comes with a Harman/Kardon tuned stereo speakers and a 2K display and unlike some manufacturers who just slap a brand name on a device, the speakers are actually really good, one that if you accidentally block the one on the bottom, it’s still louder than my smartphone and its 2K display is bright, detailed, vibrant and even in bright light, viewing angles is no issue at all.  For storage, you can get it in 32GB, 64GB, and 128GB, of which you can even expand it by an extra 256GB using a microSD card. 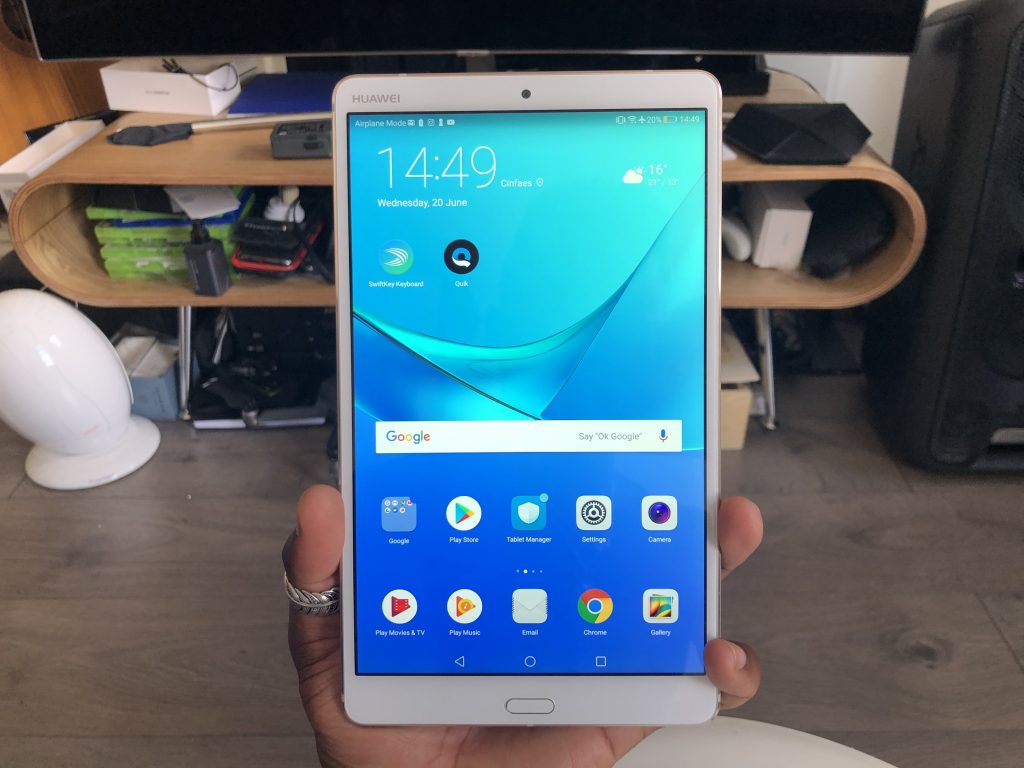 Finished in a metal body, curved corners for comfortable use, lightweight at just 316g, the M5 is definitely got a premium look and feel to it. There’s an 8MP selfie camera on the front of the M5 and the only thing that actually kind of differentiate it from looking like an iPad Mini is the Huawei logo on the top left corner which to me also serves no purpose and can be rather distracting. There’s a fingerprint scanner which works really well, however, unless you have registered your fingerprint to work sideways, using it when it’s landscape can prove difficult.  There’s also no headphone jack, but there’s a dongle in the box. The M5 has a USB C port for charging and data transfer, it also supports quick charge which will get your tablet fully charged in less than 2 hours and with a 5100 mAh battery, that’s impressive. 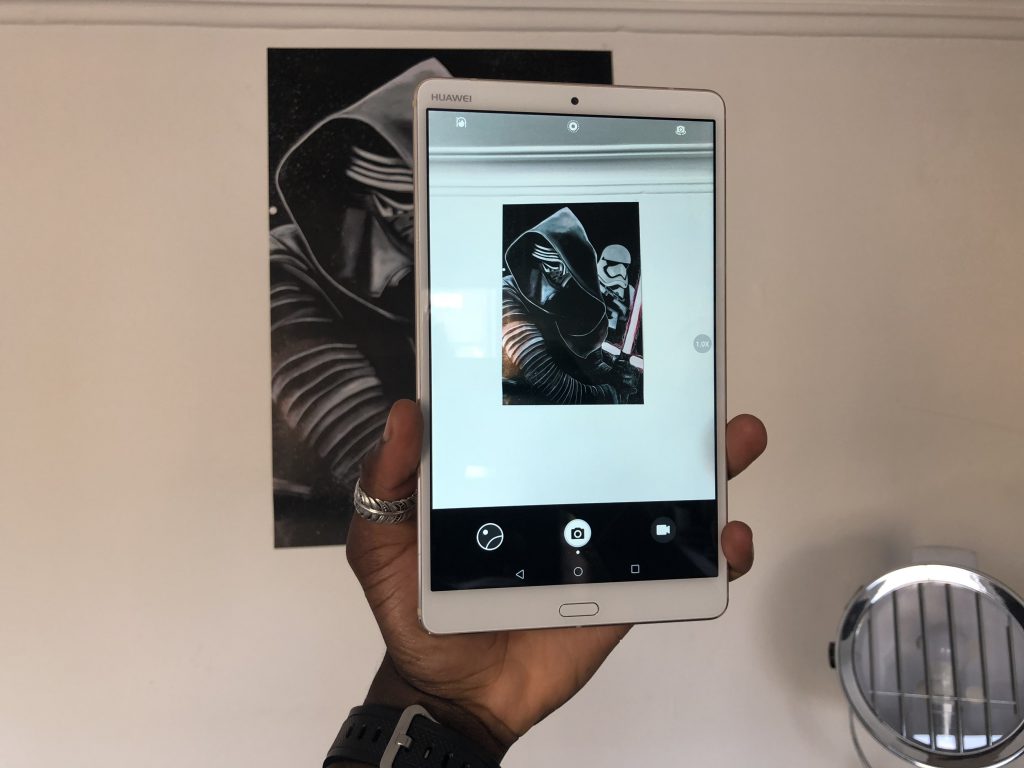 Overall the M5 design is clean and even with a 16:10 aspect ration, it still looks good for watching movies. During the time of this review, it didn’t support Netflix HD streaming so videos didn’t really take advantage of that bright 2K display. There’s also a 13MP shooter on the back, however, I don’t think this is a device for taking pictures based on my experience, but nice to have if needed.

Running on Android 8.0 with Huawei’s own EMUI skin on top, you get some preloaded apps which in this day and age, it’s pointless as most people won’t find them useful, I would have liked Huawei to find a way to direct people to their own app store to download their apps like Samsung, rather than bloat it with apps that may or may not be useful for the user. 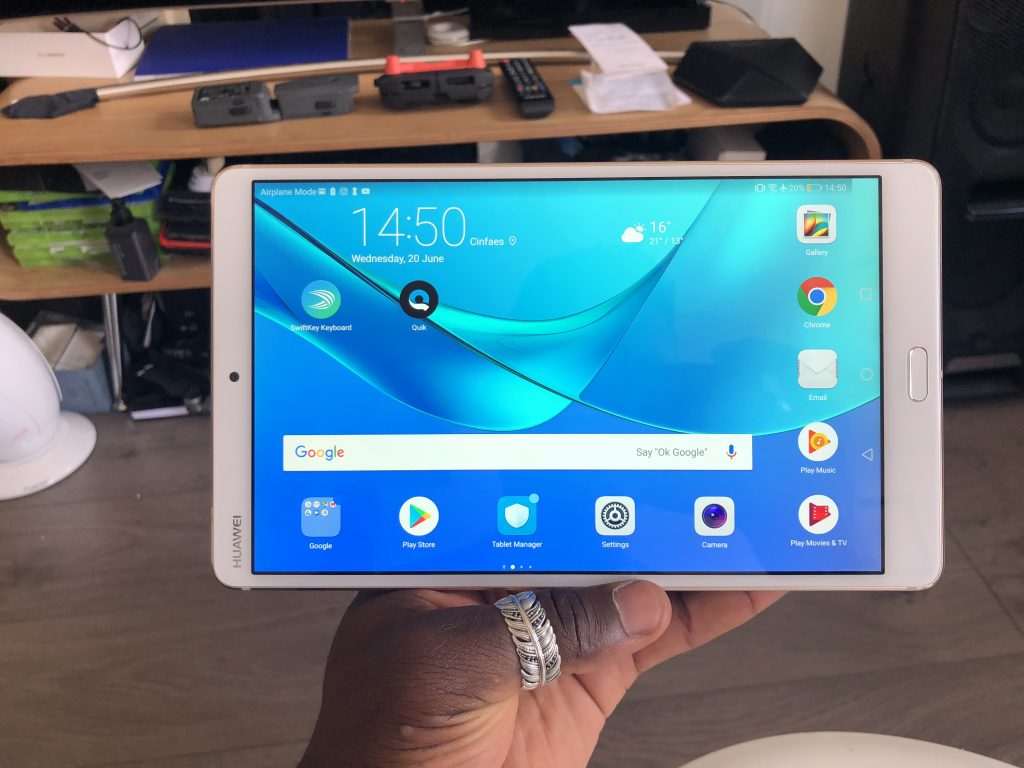 That aside, under the hood there’s a combination of 4GB RAM no matter which storage option you go for and a Kirin 960 processor, creating a fluid experience and perfect for multitasking, gaming and even processor intensive work tasks alike. One of the added benefits here is that I like how the whole interface rotates beyond just apps, so if you wanted to use the tablet in landscape mode completely you could.  The only drawback which isn’t Huawei’s fault, but Android’s is that not all apps currently take advantage of the bigger display so sometimes, apps just behave like its a huge phone and not a tablet. 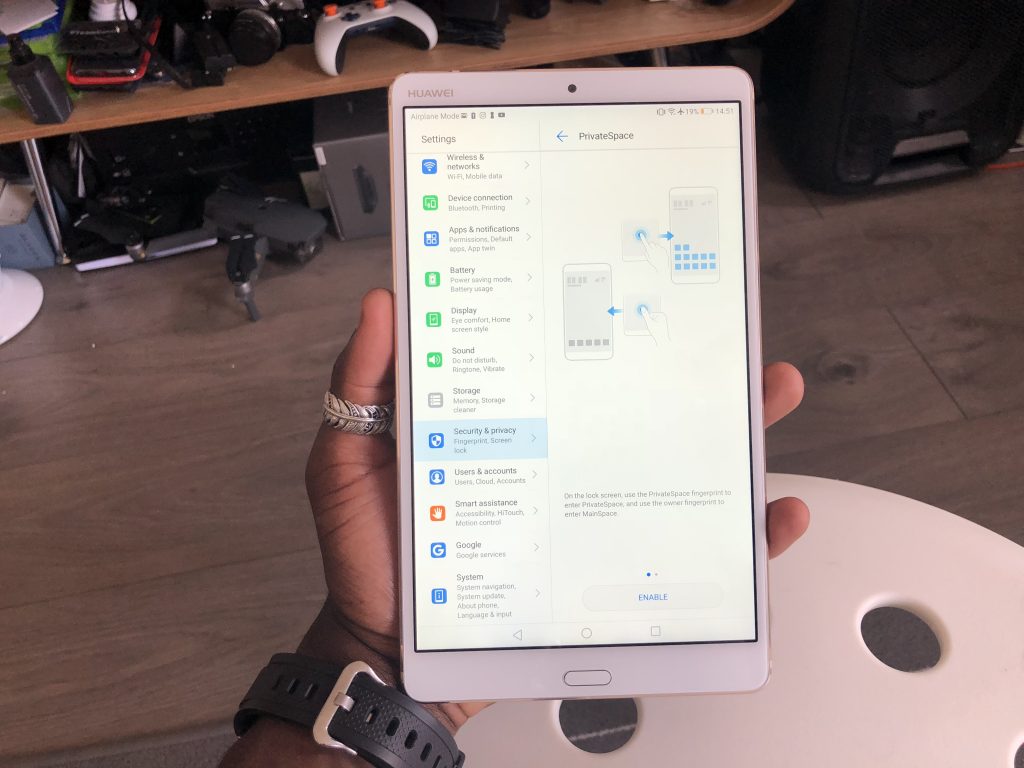 With so many power saving mode options available, no doubt Huawei knows that sometimes even with quick charge and a big battery, it might not be enough for those that spend their whole day using the M5. From my time with the M5, I found that when using it for regular web browsing, emails, watching YouTube videos, it holds its own very well, however, for long-haul flights or long train journeys when I download a bunch of TV series, I found that it struggles to keep up. I can watch 5 episodes before I get a battery low warning, one more episode and it tells me it will shut down in 30 seconds if I don’t place it on charge.

What about the Pro version?
I also spent time with the bigger Pro version and the main differences seems to be that you get a smart pen that Huawei calls the M-Pen; it has 4,096 layers of pressure sensitivity, supports tilt, shade and is super accurate.  The M-Pen is stylish too with a t-shirt clip which also hides its USB C charging port well and with an aluminium finishing and perfectly weighted for long use or accuracy when drawing or writing with it.  There’s also a bigger battery at 7,500 mAh that lasts significantly longer than its younger sibling.

The MediaPad M5 starts at £309 versus the iPad Mini 4 at £399, and for that, you get more value for your money in terms of spec and even the ability to expand storage alone is enough to choose the M5 over the iPad Mini. If you’re an iPhone user already, obviously it would make sense to get the iPad Mini as it would be easier to get used to, otherwise, M5 would be better.  Whether you go for the Pro version is also up to you depending on whether you would use the M-Pen, otherwise, I think the M5 standard is adequate for getting work done on the move, watching video content, reading books or playing games.