You’re probably familiar with the German Audi tagline: Vorsprung Durch Technik, which translates into “progress through technology”, Audi as a car brand lives and breathes this mantra to the maximum. With a strong 2019 car lineup including the exciting Audi RS Q4 coupe-SUV already on the slate, we take a look at some of the technology inside Audi motors that’s keeping the company at the forefront of car tech innovation.

Let’s start with the iconic Audi Virtual Cockpit, Audi’s take on the digital dashboard, which takes the place of the standard analogue dials and dash lights that still remain in classic and lower-specced vehicles. Launched back in 2014 and honed year-on-year, the 12.3-inch control display can provide a wealth of information. By pressing the ‘View’ button on the car’s multifunction steering wheel, drivers can switch between two modes. The first, displays the tachometer and speedometer and basic car information, including currently playing song. The second, ‘Infotainment’ mode, reduces the size of the speed meters and pushes them to the bottom left and right corners. The extra space can display a large navigation map, packed with location-specific information, such as restaurants, gas stations etc. It can also display contacts, media browsing lists and other control information, such as current road speed limit. 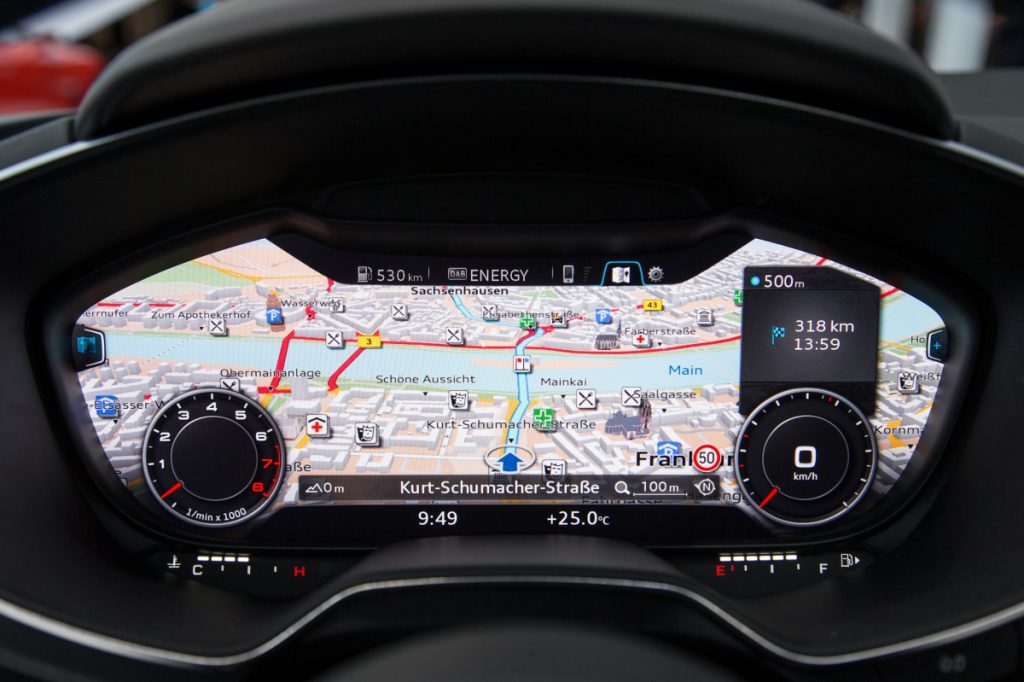 The car’s multimedia infotainment system uses the fast Nvidia 3-series Tegra 30 chip. This powerful graphic processor enables the display to run at a resolution of 1440 x 540 pixels with a refresh rate of 60 frames per second, making the Audi Virtual Cockpit tack sharp, with brilliant contrast; much better than conventional dash configurations. 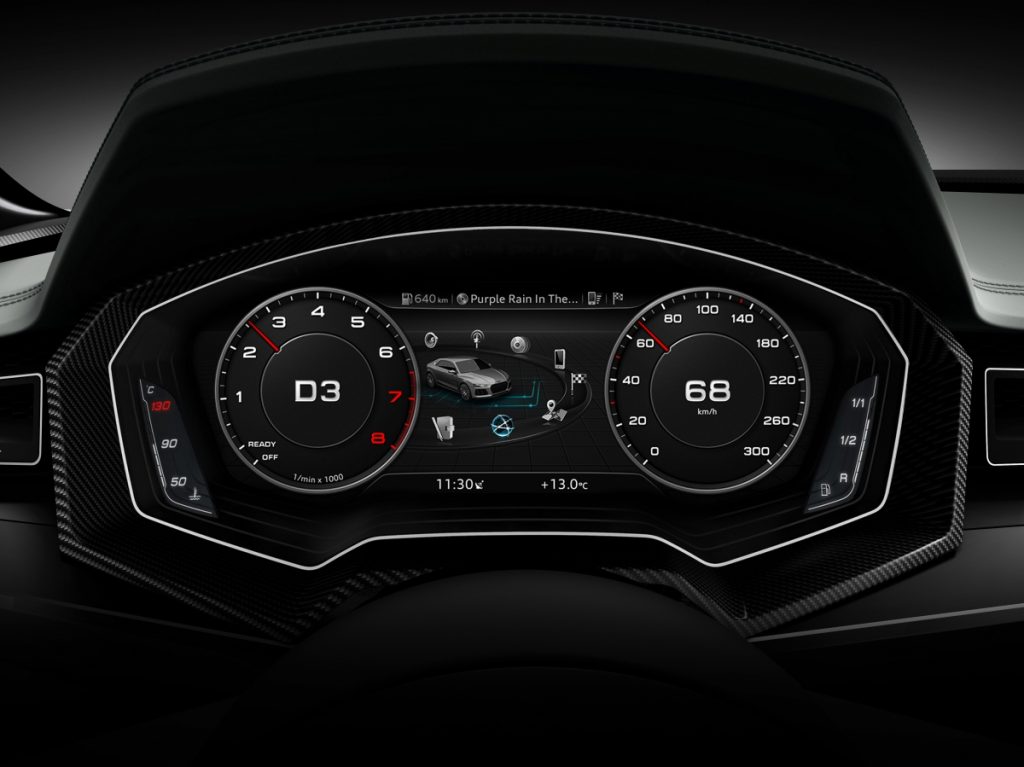 Ok, we’re not quite at remote control cars but Audi is beginning to roll out the Audi AI package to its latest higher end models, which includes the capability for drivers to park and pull out of spaces before they even get in. And we’re not talking just moving forwards and backward out of a space or garage, such as when using Audi’s garage pilot. Using the myAudi app, the A8 can parallel park and park in bays, whether forwards or backwards, all the while streaming a 360 view of the car directly to the phone app. We’ve tried similar systems from Mercedes and BMW, however, we’ve yet to experience Audi’s implementation. But on paper, it sounds like one of the most ambitious tech features in consumer vehicles to date. 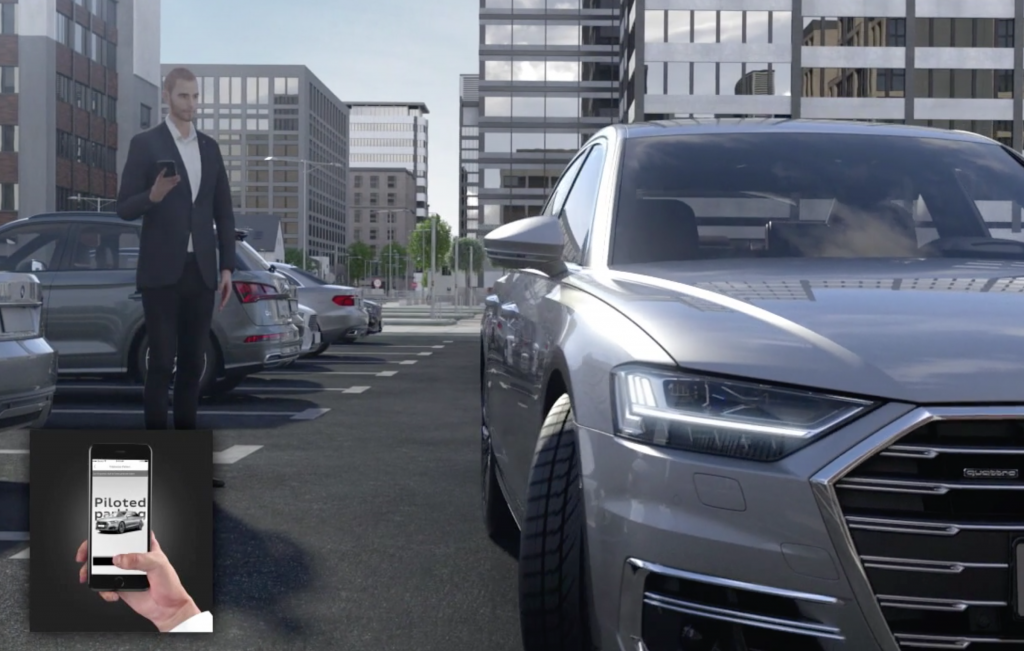 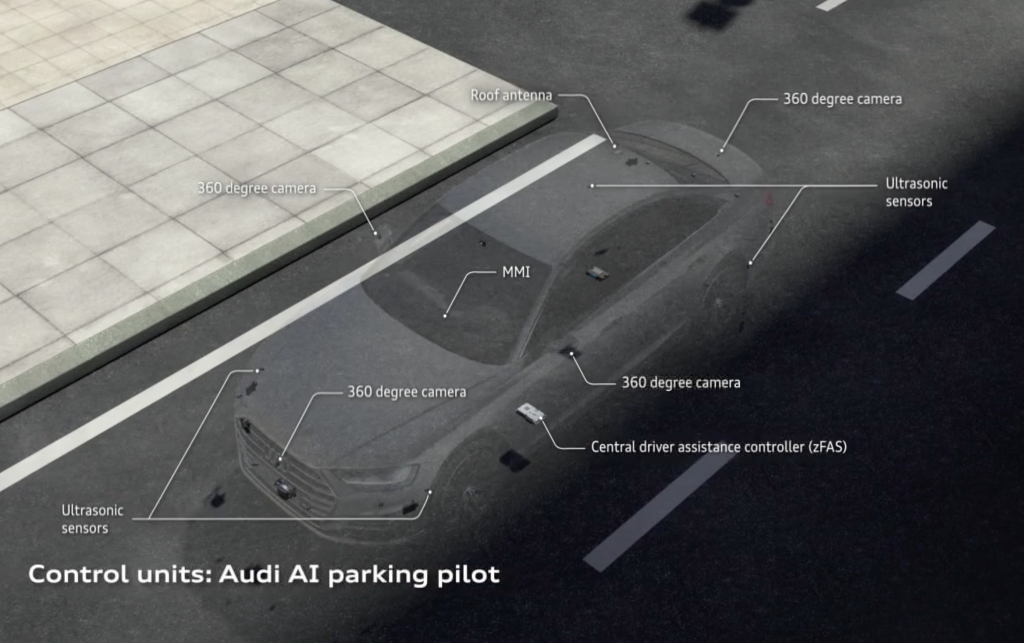 Safety features are increasingly at the forefront of car manufacturer marketing these days and rightly so. As tech gets smarter and driverless cars begin to appear on the horizon, it’s only natural that we are starting to see more of those AI/computer learning and sensor technologies filtering into modern road cars.

Aside from Tesla and some other exciting concept vehicles, Audi are really leading the way in terms of what’s possible in the driver assistance category. Audi’s top-end motors, such as the A8 can operate at automated driving class Level 3. There are five levels in total, with five being “steering wheel optional” fully-automated driving. At Level 3, Audi’s top spec driver assistance package, uses a complex array of cameras and sensors to enable the car to take over driving in certain driving situations. For example – when driving in traffic or driving along highways with central reservations at speeds up to 37.3mph – the A8 can start the engine, brake, accelerate and manage steering, even with other vehicles cutting across in close proximity. The idea is that the assistance can help to reduce driver fatigue during jams and long drives. 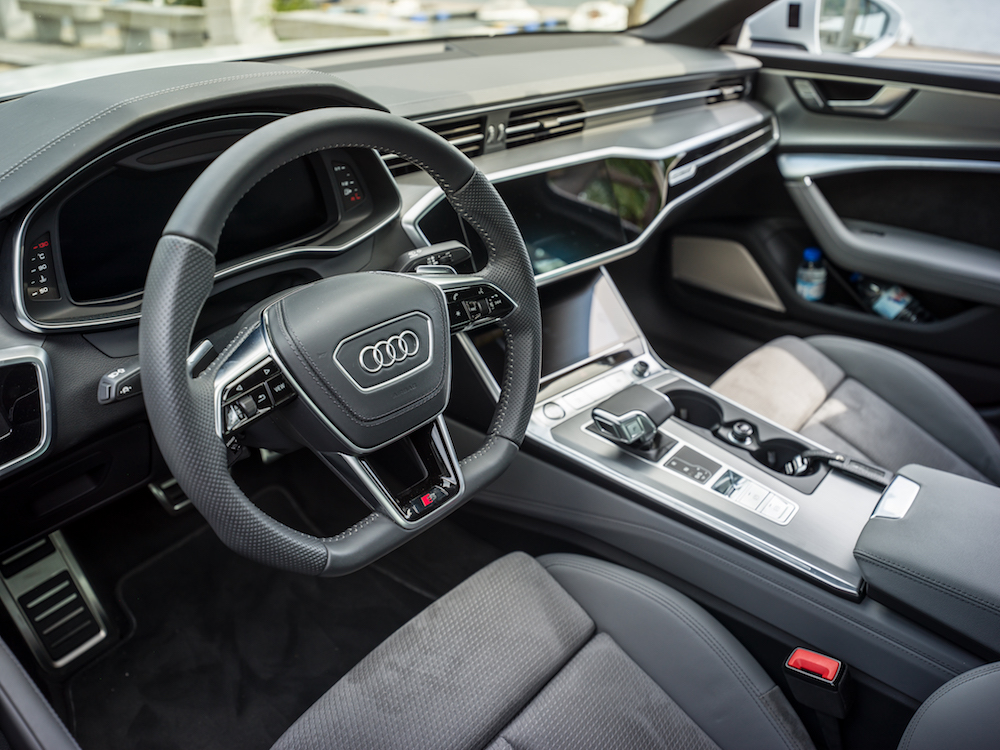 But if drivers are allowed to take their hands off the wheel completely, what happens when traffic breaks up or if they start to fall asleep and their attention is needed? Aside from its forward detection array, which gauges the speed of cars moving in front of you, Audi has been clever enough to install an in-cabin camera system that can detect sleepy drivers and will begin to warn them in stages. If the visual and audio prompts to retake control of the steering are ignored, the A8 is capable of safely bringing itself to a standstill.

We’ve had the pleasure of experiencing Audi’s Central driver assistance (zFAS)  during testing of the new Audi S5 and Audi A6, and at first it is slightly disconcerting as you feel the car taking over, but once you get used to it, it really does make for a wonderfully comfortable driving experience. We also enjoyed the heads up display projecting speed and speed limits in line of sight while driving, helping to keep our eyes more focused on the road throughout driving. Rather than leaning on the system, it filled us with confidence, knowing that the car was working with us to ensure as safe a drive as possible. Combining data from the cars cameras, sensors, traffic signs, digital map data and driver input, the Audi zFAS system is one of the most comprehensive available in any consumer car range currently on the market. 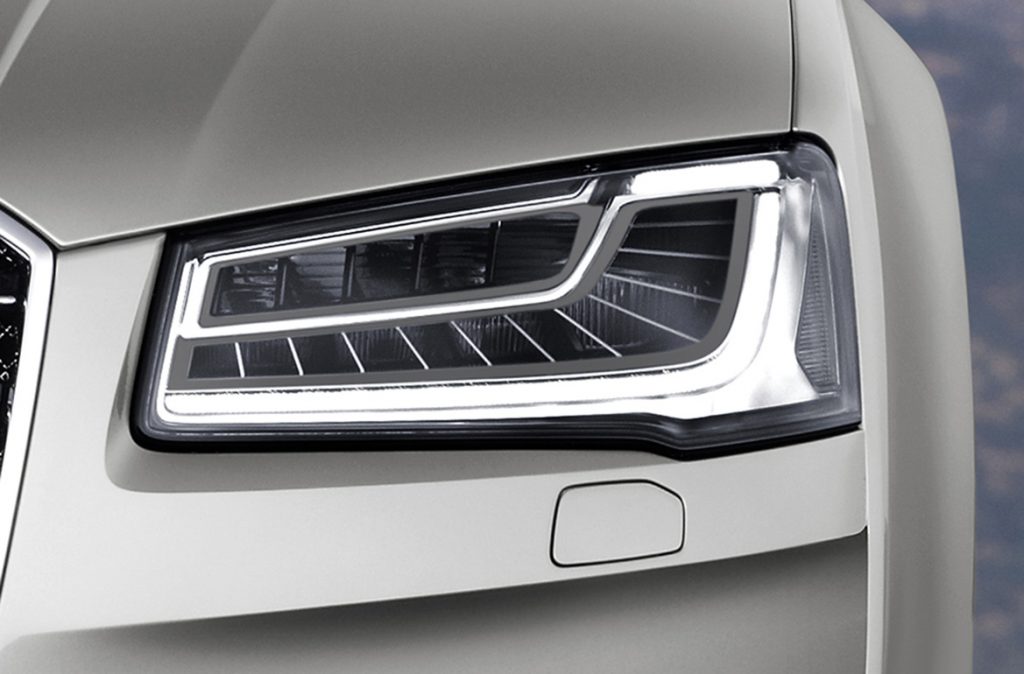 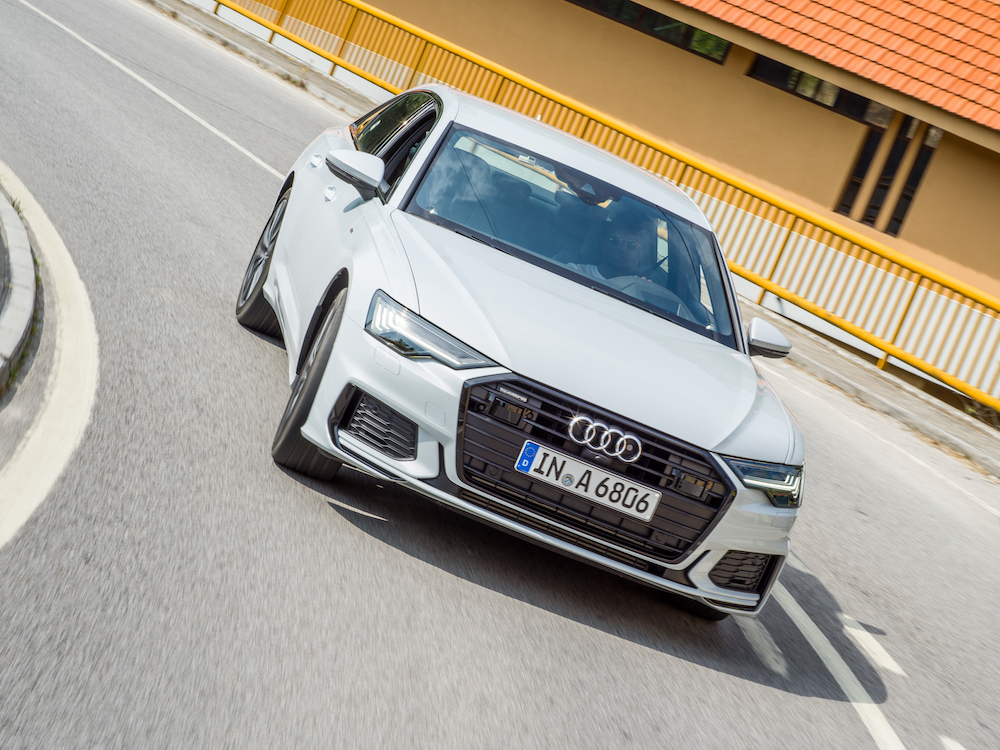 For years, Audi has been introducing innovations developed and tested by its successful Le Mans 24 racing team. Its stunning Matrix LED lights are one such class-leading innovation. Made from 25 individual segments, the high-beam section of the Matrix LED headlights uses small LEDs, which are focused using adjustable lenses and reflectors. Using a combination of its intelligent camera systems, navigation data and sensors Audi cars, such as the new Audi A8, can “see” ahead and dip, deactivate or activate lights to respond to the car’s surrounding environment while still keeping the road brightly illuminated. Audi’s latest Matrix LED headlights can also deploy dynamic turn signals and cornering lights, making it easier and safer for drivers to negotiate roads in all lighting conditions.

Huawei and Audi recently announced a commitment to working more closely together in order to lead the way in developing LTE-V, which in theory will allow cars to communicate with each other at high speed and traffic signals for example. Intelligently connected vehicles that can locate themselves within their environments and communicate various strands of data in real-time could overcome one of the major hurdles for the deployment of driverless vehicles on open, public roads. We expect to learn more about these developments in September as it enters its next phase at the World of Internet of Things (WIoT) Expo in Wuxi, China.

Check out our video of the new Audi A6 above, where we show off some of the car’s other advanced and luxury features, many of which you will find across Audi’s range of high end vehicles.