Twitter this morning launched their music service branded #Music. It’s available on the App Store right Â now for users in theÂ UK, Ireland, US, Canada, Australia and New Zealand for now with more countries to be added in future. Not got an iPhone? Never fear, there’s also a website for it. Just head over to music.twitter.comÂ for the same experience in your web browser.

What’s the point of the app? It lets you find new music in a whole new level, it is almost the Music app or Spotify on Social Media steroids with everything Twitter orientated; you will be able to derive music based on what is trending from people you follow, Twitter as a whole, your Music library and from Music Artists who you already follow – there are 4 different sections to the app;

Popular: This is where you will find all the artists/music that is trending on Twitter. It’s a lot like the UK Top 40 except it’s in real time and the list has 140 slots, so there’s a lot to choose from. 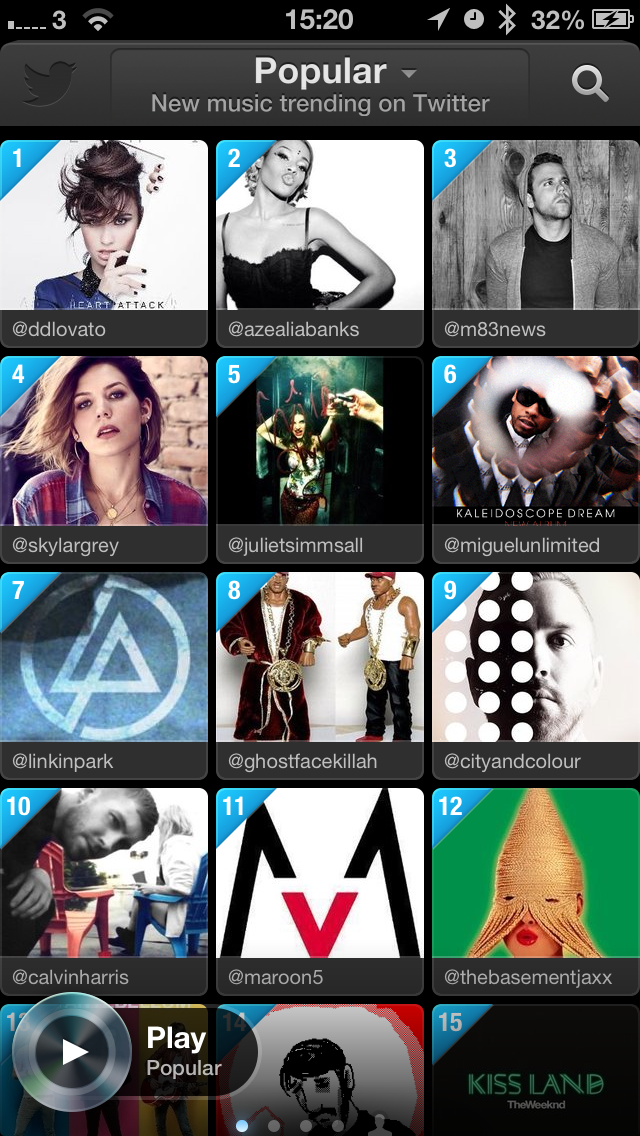 Emerging: This is where you’ll find the hidden talent in the Twittersphere – these songs are less well known than those in the Popular section but you do find some hidden gems in there and have the opportunity to find some new artists! 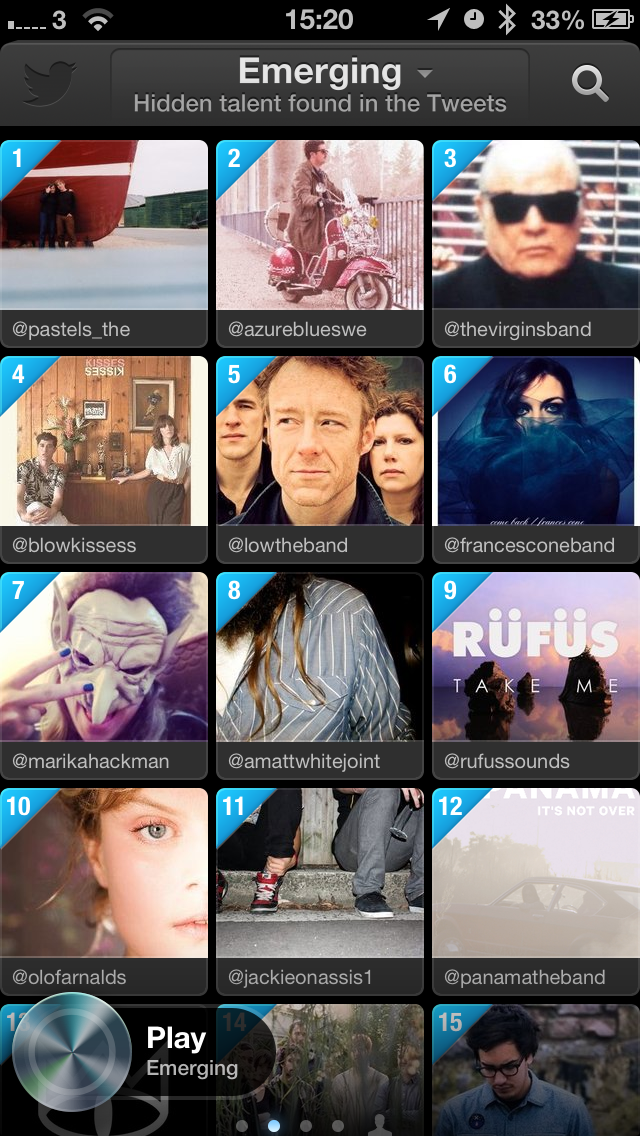 Suggested:Â This is where you’ll find artists that you might like based on the music you’ve listened to in the app in the past and it also depends on what musicians you already follow on Twitter. This feature will improve and become more accurate the more that you use the app. 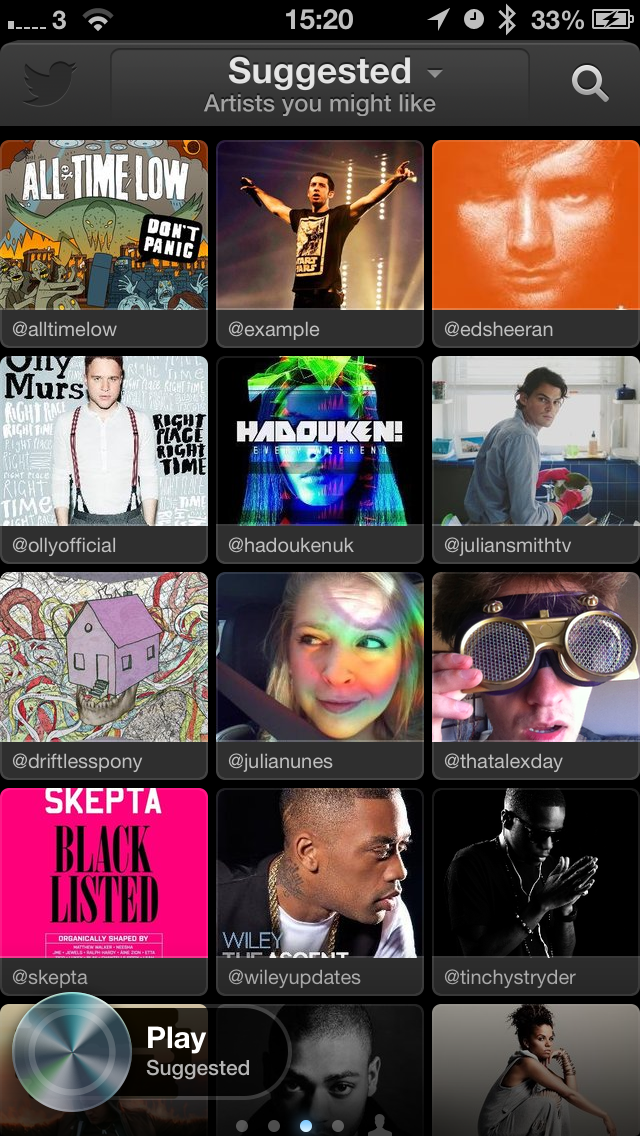 #NowPlaying:Â This is where #Music comes into its own. This is where you’ll see what your friends on Twitter are listening to (depending on if they tweet the song they’re listening to with #NowPlaying). It really brings the social element to music, something that Spotify tried to do recently (but not as well as #Music does in my opinion). 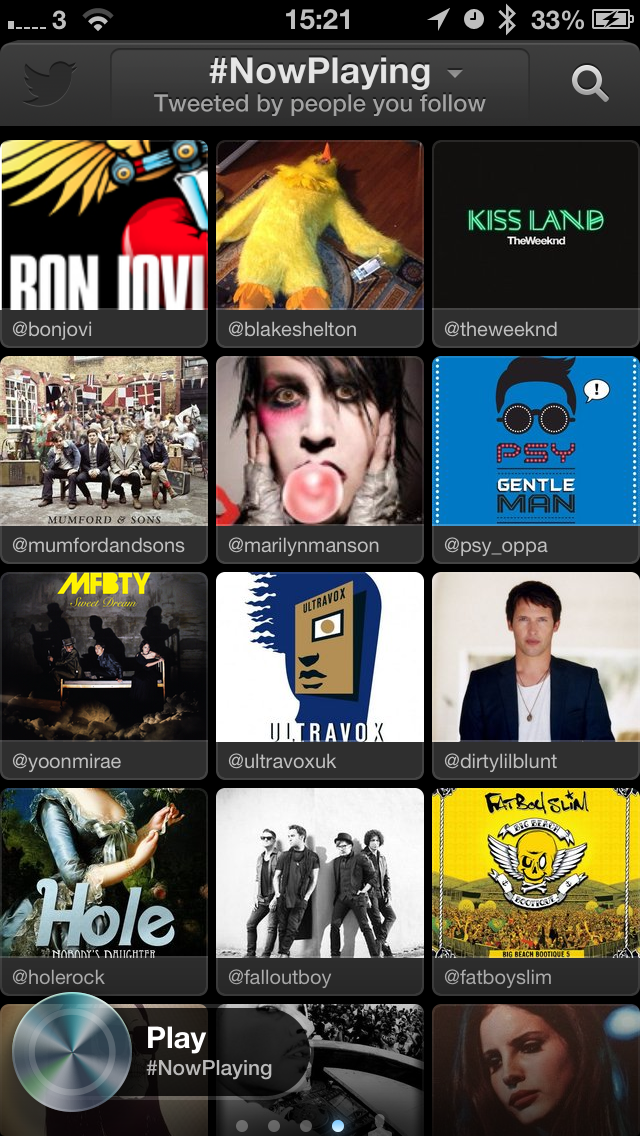 You also have your profile page where the artists that you follow are displayed and you can play their music – think of it as your own personal cocktail of music. The best part is that it’ll play random songs from each artist so you may discover new songs from an artist that you love – it’s a win win situation really.

Don’t make the mistake of thinking that Twitter is a music streaming service. Oh no, it’s just an app that finds you all the best music and it uses other music streaming services to deliver the music to you. Right now there are 3 services compatible with the app – iTunes, Spotify and Rdio. If you use iTunes to stream the music, it’ll only give you a 30 second preview of the song whereas if you log in with your Spotify or Rdio account, you can have full access to any song that you find on the app. Don’t worry though, Twitter are looking to integrate more services in future!

At a glance at the #Music app, you can see the amount of attention to detail that the developers had. Everything about its UI – the simplicity of it makes it look beautiful and modern. A favourite part of mine is the CD/Vinyl that the song plays on – both the minimised and full screen version. Imagine Spotify and Twitter had a love child – #Music is it. Discovering new music and sharing it with your friends all within an app.

We’ve gone hands on with the #Music app to show off all its main features in a video which you can find below;

It might also mean more sales for music artists who rely on iTunes revenue because if I find a music I like via another Twitter user, I might end up buying on iTunes which means more revenue. Â It brings together Social Media, Artists, iTunes and other music sources like Spotify. Â Twitter can possibly go on to add more apps such as Soundcloud or even make a Video version linked to YouTube.

Like the look of #Music? You can grab it from theÂ App Store hereÂ for free and you can also access itÂ here via your web browser, no Â doubt Android version will be released very soon also. What do you think of #Music? Is it just a one or two time use thing or is it here for the long haul? Let me know!