A lot of times I have traveled, I have had to carry different chargers with me just to suit my needs no matter what part of the world I visit. The PlugBug is a genius accessory from TwelveSouth that just simplifies life with a charger capable of charging my MacBook pro as well as my iPhone whilst been able to use it globally be it two pin or three pin.

Twelve South is pleased to unveil PlugBug World, an all-in-one USB iPad/iPhone charger that converts any MacBook Power Adapter into a dual charger that can be used globally. The powerful PlugBug World piggybacks onto your MacBook power adapter, allowing you to simultaneously charge your MacBook and iPad or iPhone from one electrical outlet. This world version of the PlugBug charger includes five international snap-on plugs for use in the UK, Europe, Australia, China, and North America. PlugBug World is compatible with all Apple MacBook Power Adapters and is available now at www.twelvesouth.com.Â for $44.99 / Â£39.99 / 44,99 â‚¬.

PlugBug uses the clever trick of attaching to any Apple MacBook Power Adapter by replacing its attached plug or extended power cord. When snapped into place, PlugBug not only allows for worldwide charging of MacBook, but also provides a separate 2.1-Amp USB charger for iPad/iPhone. Once attached, simply select your local plug, or use your extended cable, to power both your MacBook and iPad or iPhone from a single outlet. This powerful accessory is a lifesaver in locations where finding multiple wall outlets can be a challenge, and where charging your MacBook and iPad quickly is mission-critical to your next meeting or presentation. 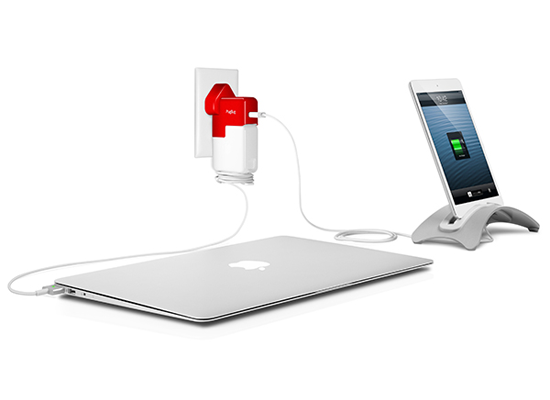 The bright red PlugBug World is easy to spot in a sea of white adapters in your bag or on the wall at the airport. Because PlugBug World charges MacBook plus iPad or iPhone at the same time, you can purge the number of power cords and international converters you carry. And since MacBook USB ports are precious commodities on the road and in the office, PlugBugâ€™s extra USB charger is a welcome addition.