The Blackberry BOLD 9000 was the best of Blackberry when it was released during the summer of 2008 and has remained the best until now. With the release of the BOLD 9900 on August 12, 2011, has it finally found its TRUE successor? Lets find out! 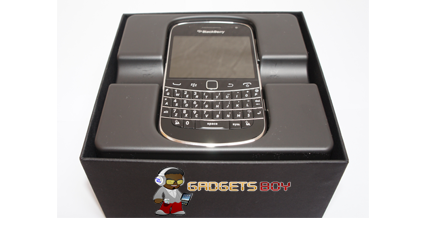 In the box
Upon opening the box you are met with the fulfilment of all your blackberry dreams and expectations. Immediately the quality of the BOLD 9900 jumps at you. After tearing yourself away from the device itself, you are then met with the usual Blackberry contentsâ€¦USB Charger, Manuals, Genuine leather pouch, Cleaning cloth, Earphone, the Battery, but NO Memory card. 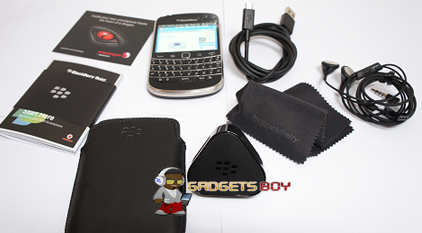 Looks and Feel
As soon as you pick up the Blackberry BOLD 9900, you immediately feel the quality of the device. Its not a heavy device but weighing in at 4.59oz / 130g it is by no means a lightweight. The high-grade soft to the touch rubberized back makes it very comfortable to hold and doesnâ€™t feel like its going to be slipping out of hands at all. That coupled with the high-grade carbon fibre looking plastic back door and the brushed metal band that wraps around the device, the Bold certainly has a PREMIUM feel.

The hardware solidly put together with no squeaks and squeals! Blackberry say it is the thinnest Blackberry they have made to date, with a depth measuring at 10.5mm it certainly feels very thin in the hand, but in a good way. The all around black look of the phone works very well against the brushed metal to give you that wow factor that we so missed from the original BOLD 9000.

On the LEFT side of the BOLD there are no buttons, all you have are the 3.5mm headphone jack on the top left and slightly underneath that is the standard Micro-USB (5-pin micro-USB 2.0) connector which doubles as your charging port. 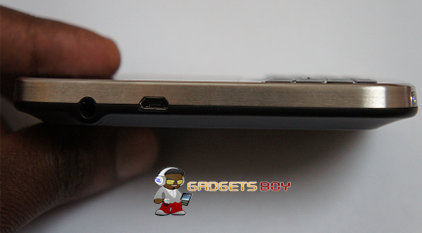 On the Right side of the phone is where the good stuff is. On the top right-hand side is where you will find your popular three buttons for you Media. The top button to fast forward, the middle button to play and pause, and the bottom one is the rewind button. 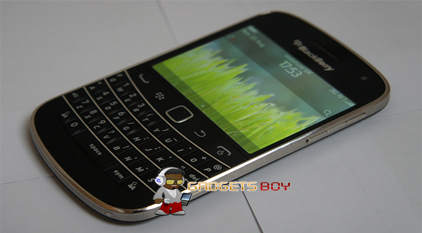 On the top of the BOLD 9900 is the very useful Lock-Screen button, which we have become accustomed to.

Unlike other Blackberries, this one is not easily mistakenly pressed and awakening your phone against your will. This is due to its location, and itâ€™s by no means a draw back! The tactile feedback on all the buttons around on the brushed metal band is very good, so no complaints from us there.

Yes, the Keyboard on the BOLD 9000 was the best keyboard ever placed on a Smartphone, so the expectations for Blackberry to deliver were very high! The real question is â€˜did they?â€™ The simple answer to that is YES!!

That iconic 35 key backlit keyboard has returned. Not only did they manage to bring back the old BOLD 9000â€™s keyboard but they somehow managed to improve it in every way. The Keyboard on the BOLD 9900 is 5% bigger than its predecessor and the tactile feedback has greatly improved altogether! The buttons are well spaced out, they have that raised curve design that helps your thumbs differentiate each key from the one next to it, altogether making it really easy to type very quickly with great accuracy. Without a shadow of doubt, this is by far the best keyboard to leave Blackberry factories. I will also go as far as to say this is the best Hard Keyboard on a smartphone on market to date, hands down! Check out the picture below to tingle your senses. 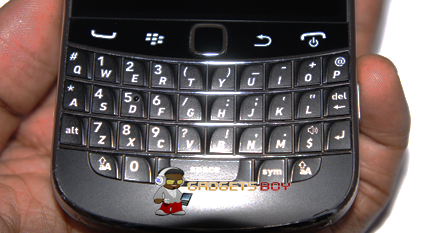 This keyboard coupled with the most welcomed Touch Screen to the Blackberry BOLD line makes for a very easy to use device.

The Screen
As I said above the Touch Screen is very welcome to the Blackberry BOLD line, in-fact, it makes you wonder why they never put one on there before!? 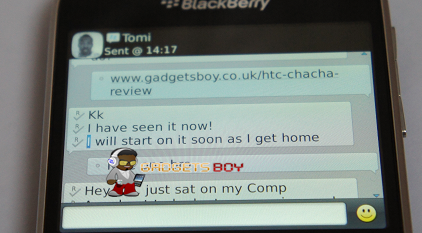 The Screen itself is a 2.8â€ VGA, Capacitive Touch Screen with a resolution of 640×480 and a 287 dpi, making for a very clear screen with crisp detail. Its far from disappointing, in-fact not only does it rival some of the leading screens on Smartphones to date, its even better than some of them.

Due to it being capacitive, the pinch to zoom works very well and because the resolution is much improved, it makes zoomed-in content crisp and clear without pixilation. The screen hardware works very well with the new Operating System (OS 7), which brings us to the next topicâ€¦..

The new BOLD 9900 is the first to launch with Blackberryâ€™s new OS 7.0. To be honest, Blackberry OS 7.0 interface has not changed much from Blackberry OS 6. What has changed are the icons and how smooth the phone works.

The Icons now come with an injection of colour and are all in all much more pleasing to the eye and they also add to that whole premium feel and look.

Were Blackberry OS 7.0 really shines over its predecessors is how smooth it runs. The have married the software and hardware really well. Making use of the 1.2GHz Snapdragon processor and that much welcomed increase of RAM to 768MB, they have introduced what they (Blackberry) are calling Liquid Graphics.
This all-new Liquid Graphics makes such a difference in the way the device responses to you commands. The transition from screen to screen, app to app and page to page are much smoother with no jerking or stuttering and overall dramatically improving your interactive experience with the device, and as I said, its pleasing to the eyes indeed.

But how will this improved OS coupled with the bumped up processor, RAM as well as those Liquid Graphics affect my battery life, I here you ask!? Well here is your answer â€˜not very much at all.â€™ 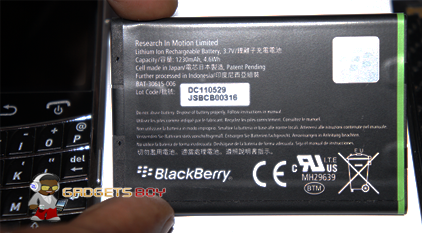 Although the Battery is only a 1230mAh, it still has a lot of life in it. On my first charge I managed to get through an entire heavy usage day and only started looking for a charger after 10pm. The battery in the old BOLD 9000 was indeed bigger and would last a lot longer, but thatâ€™s because it was lighter in terms of software and hardware (weaker processor and less RAM), so although the new BOLD 9900 the battery will last you an entire day on heavy usage, its by no means as long lasting as the ones in previous Blackberries. However if you were to ask me to choose between a 2 day lasting battery and more processing power and RAM, I would choose the power any day.

Although the camera is only a 5-megapixel camera which has a flash, it does deliver good quality images that have a decent amount of detail. It does have a lot of features such as face detection, portrait, landscape shots, sport mode, night mode, text mode, beach mode and snow mode. All of which seem to work ok, but they are nothing to write home about. Maybe because I am very used to high quality images taken on my DSLR Camera that I donâ€™t seem to pay much attention to mobile phone camera, however should I be caught unprepared, the camera on the BOLD 9900 would have to do. 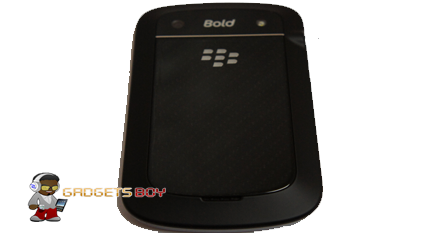 The camera can also shoot 720p video, which is surprisingly good. The video is not jumpy and the frame rate is descent. It without a shadow of doubt on par with other high end device that spot the same megapixel resolution, so the Camera capabilities should by no means be a deal breaker.

Although there aren’t many bad points about the BOLD 9900, there are still some. To start off with although the browser has come a long way since the original BOLD 9000 and even the browser found in Blackberry OS 6, the browser is not as impressive as it could be. They have done a lot of work on it, the pages render well, the pinch to zoom is as buttery smooth as the browser on the iPhone 4, but the BOLD 9900 still can’t win when it comes to webpage loading. Although itâ€™s not far behind the current generation smartphones, its not the winner either, considering this is a new device that you plan on keeping for a few years.

The other bad point is the Applications, or should I say the lack thereof. Because Blackberry OS 7 is still new, most of the Apps I was running on my Blackberry Torch 9800 will not work on the new BOLD 9900. If I want them, I am lest to search the web and install them from there. Although this isn’t a permanent problem as it can easily be fixed with a software update, still it would have been nice if it worked out of the box. Its just irritating considering I paid for half the apps that are currently under the ‘unavailable’ title in Blackberry App World.

All in all, the new BOLD 9900 more than lives up to expectations. With its more that welcome touch screen that works perfectly, the return of that iconic big keyboard, excellent call quality, a smooth and more than capable Blackberry OS 7, browser improvements, the excellent build quality and premium feel, this phone was definitely worth the wait. The BOLD 9900 is definitely the cream of the crop from Blackberry’s line up. 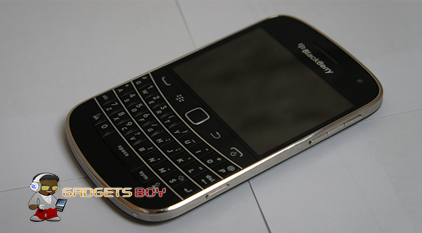 After so many years, it finally feels good to pull this device out of your pocket and not feel embarrassed. The 9900 certainly brings that BOLD factor back once again.

Kay is a Gadgets enthusiast who unboxes and reviews latest gadgets. You can find some of his unboxing videos on YouTube as well as on GadgetsBoy.