Among the boatload of crazy tech on show at CES 2018, LG decided to throw 65-inch a “rollable” ultra-high definition display into the mix.

The outrageous display from LG is accompanied by a bundle of other attention-grabbing screens, including a 77-inch “wallpaper” OLED concept display (yes wallpaper displays are soon to be a thing). The point of the concept is to demonstrate the true value of OLED screen technology. At CES 2018, LG is also showing off an 88-inch 8K resolution OLED display, something we were expecting to see from a few other manufacturers at this year’s show in Las Vegas. But LG has pioneered large-OLED displays for home. Projectors are another area where LG is hoping to dominate and the company’s ambitions look promising with the announcement of the HU90K series, its first 4K UHD projector. Traditionally 4K projectors tend to be heavy and expensive, however, as is the way with technological developments, they’re getting smaller. LG’s engineers and designers have managed to develop an attractive and more affordable 4K UHD projector without sacrificing image quality. LG’s debut 4K UHD projector promises a great cinematic experience and still manages to be portable. If you have the space, this projector will be able to throw a screen up to 150-inches in size and also supports HDR content.

The projector’s portable size and unique upright design is only made possible by the mirrorless I-shaped engine which allows the projector to show perfect images whether it’s placed on the floor, mounted on the wall or hanging from the ceiling. With a convenient carrying handle and Auto Cord feature, owners may never want to mount the LG 4K UHD projector since it looks great in any room for any occasion. What’s more, the Mirror Reflector can be used as a lens cover to protect the projector from dust when stored away. Two powerful yet clear 7W speakers deliver a true cinematic audio experience without the need for external speakers or a sound bar. 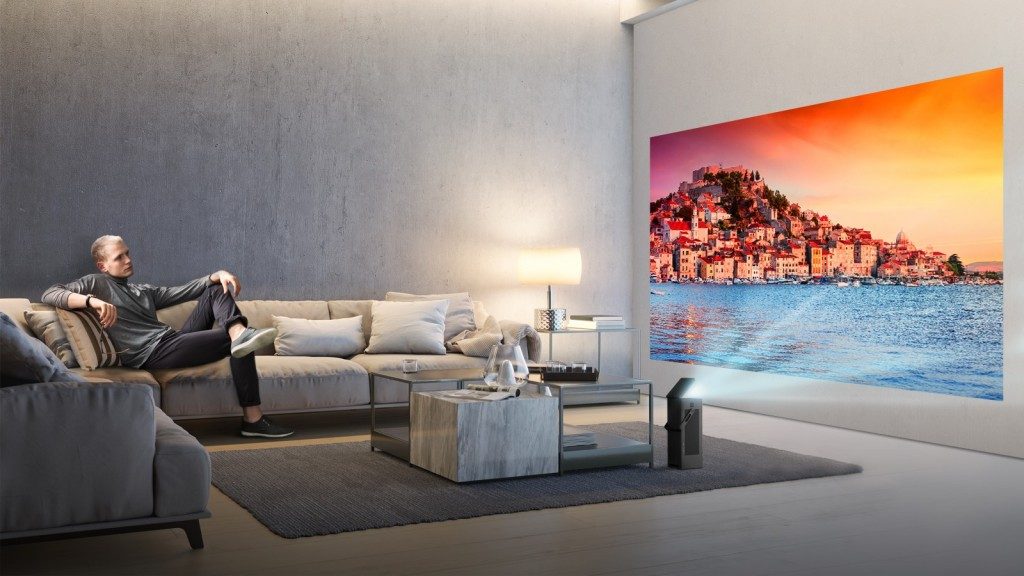 LG 4K UHD projector owners will have no shortage of content to watch, as the projector’s webOS 3.5 smart TV interface can access the most popular online streaming services offering 4K content. And standard connectivity options include ports for USB, Ethernet and HDMI, as well as wireless support for external devices such as a keyboard and mouse.

“At this year’s CES event, we are excited to bring value to consumers with our first 4K UHD projector, which delivers the highest resolution we’ve ever offered in a compact size,” said Chang Ik-hwan, head of LG’s IT business division. “LG’s 4K UHD projector will lead the way in changing how consumers view 4K content in any room in the home, wherever there’s an audience.”

Anyway, back to rolling screens, LG’s 65-inch rolling screen prototype possesses a 3840 x 2160 (UHD) resolution and will make the perfect compliment to any minimalistic interior environments. This is because it practically disappears when not in use, rolling down into its base unit, which could seamlessly be incorporated into a desk, fireplace or mantlepiece feature.

Keep an eye out on @Gadgetsboy socials for updates directly from the show’s press conferences and show floor throughout CES 2018.