The long-awaited full-frame mirrorless offering from Nikon has finally been revealed in the form of two new cameras, the Nikon Z7 and Nikon Z6, with an entirely fresh lens mount for the legendary camera brand.

The new Nikon Z7 and Z7 cameras are identical in terms of build, both cameras have magnesium alloy frames and Nikon D850 levels of weather sealing. With deep grips and a solid feel to them, they handle like a Nikon D750 DSLR body. Both have tilting touch screens, but they’re not fully articulated. They also feature an all new Expeed 6 processor, a bright 3,690k-dot OLED viewfinder and a smart OLED matrix panel displaying camera settings on their top plates. The differences come in the sensors, AF, ISO and continuous shooting speed.

The Z7 has high resolution 45.7-megapixel back-illuminated CMOS sensor with an ISO sensitivity range of 64-25,600, while the Z6 has a 24.5-megapixel back-illuminated CMOS sensor with an ISO range of 100-51,200. The Z7 camera has no optical low pass filter, while the Z6 does. The Nikon Z6 is also slightly faster, due to its smaller sensor, making it capable of capturing up to 12 frames per second of continuous frames, while the Z7 tops out at 9fps. The buffer of the Z7 will allow 23 12-bit compressed RAW files or 18 14-bit uncompressed RAW files in succession. The Z6 will give you 43 frames of 14-bit uncompressed RAW however. The Z7 is offering more phase detection autofocus points – 493 to be precise – versus 273 in the Z6. Perhaps the only potential disappointment for some, is the fact that Nikon has put all of its eggs in the XQD card basket, with no dual slots and no support for UHS-II SD cards. 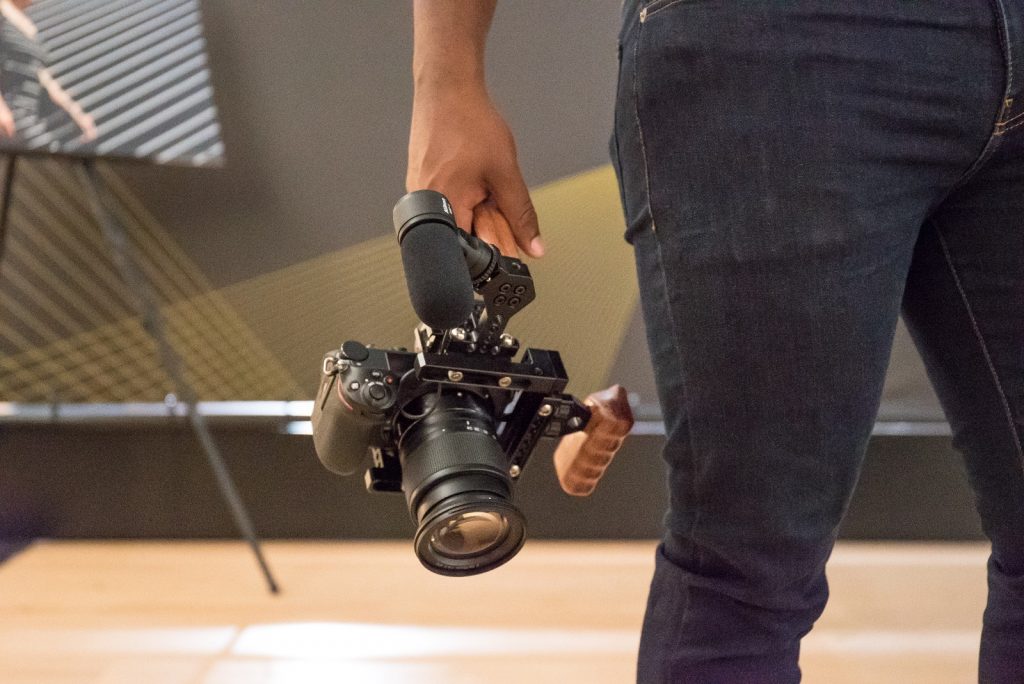 Video creators will be pleased to learn that both the Nikon Z7 and Z6 offer 4K 30p-video recording with full pixel readout in cropped DX mode and 120fps HD video with audio recording. The Z6 will offer 4K-video with full pixel readout in both FX and DX mode. You will also be able to record 10-bit video via an external recorder. Nikon has partnered with Atomos to enable the Atomos protocol, which will allow creators to start/stop recording via the external recorder. Timelapse, focus peaking, N-Log (Nikon’s answer to C-Log and S-Log), zebra highlights and Timecode are all included. The Nikon Z7 and Nikon Z6 have separate mic and headphone ports and USB-C connectivity. With up to 5 stops of in body stabilisation for both stills and video the cameras should offer some very steady recording capabilities handheld.

Fully compatible with existing Nikon F-mount lenses the new Z-mount has also opened up a new range of possibilities for Nikon’s lens designers. This means we will see Z NIKKOR lenses lower than f1.4 and as low as f0.95 (not a typo). At launch they will be offering a 35mm f1.8, 50mm f1.8 and a 24-70mm f4 option for the kit lens. As for pricing Nikon is being competitive, with the Z7 starting at £3399 body only and £4099 for the kit option with the FTZ mount adapter. The Z6 is £2099 body only and £2799 for the full kit. Shipping for the Nikon Z7 will begin from mid-September. The Nikon Z6 will be hitting markets in November. 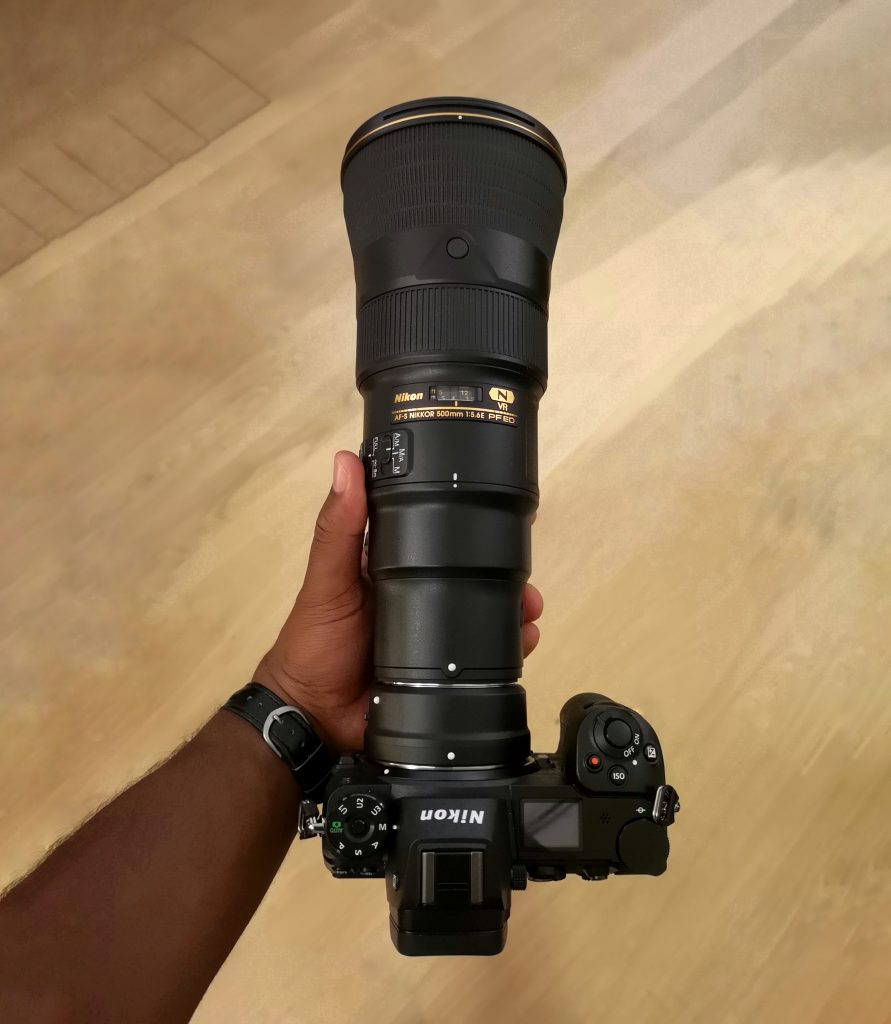 Nikon also announced an impossibly diminutive 500mm f5.6E PF ED VR AF-S lens that will make for an killer combo with the Nikon Z7 or Nikon Z6 camera body. Check out our video below for our first impressions and check back in with us for the full review in the coming month or so.

The recommended retail price and intended sale start dates for these products are as follows:

Nikon will expand the value of mirrorless cameras through the pursuit of a new dimension in optical performance and by upholding Nikon’s tradition of quality while responding to the evolution of imaging technology.

The Nikon Z 7 and Nikon Z 6 are equipped with a new backside illumination full-frame, Nikon FX-format CMOS sensor with built-in focal-plane phase-detection AF and the latest image-processing engine, EXPEED 6. The Nikon Z 7 has 45.7 effective megapixels, and supports a standard sensitivity range of ISO 64–25600.

In combination with NIKKOR Z lenses, the camera achieves an outstanding level of sharpness and detail, all the way to the edges of the image. The Nikon Z 6 is an all-purpose FX-format camera with an effective pixel count of 24.5 megapixels, and supports the wide range of ISO 100–51200 standard sensitivities. With superior performance at high sensitivities and full-frame 4K UHD movie recording with full pixel readout, the Nikon Z 6 responds to a variety of needs, such as shooting in dimly lit environments, and movie recording.

The Z 7 has 493 focus points and the Z 6 has 273, enabling broad coverage of approximately 90% of the imaging area both horizontally and vertically. This hybrid AF system uses an algorithm optimised for the FX-format sensor, to automatically switch between focal-plane phase-detection AF and contrast-detect AF with focusing. The use of NIKKOR Z lenses further maximises AF accuracy with both still images and movies.

The Z 7 and Z 6 are equipped with the new EXPEED 6 image-processing engine. Employing the superior resolving power of NIKKOR Z and NIKKOR F mount lenses, subjects are rendered more sharply than ever before. Noise is also effectively reduced. Additionally, a mid-range sharpening option has been added to Picture Control sharpness parameters.

This option, along with existing sharpening and clarity parameters, allows users to make various textures within the screen sharper or softer, for both still images and movies. The cameras also offer 20 options of Creative Picture Control, supporting creative expression. The effect level is adjustable from 0 to 100. The electronic viewfinder adopted for the Z 7 and Z 6 is comfortable and easy to use, comparable to optical viewfinders.

Both cameras are equipped with an electronic viewfinder for which an approximately 3,690k-dot OLED panel has been adopted. It draws on Nikon’s superior optical technologies and image-processing technologies, ensuring a clear and comfortable view comparable to that of optical viewfinders, with reduced aberration and minimum eyestrain, even during extended shoots.

Furthermore, a fluorine coat that effectively repels dirt has been applied to the eyepiece protection window. In addition, the menu can be displayed in the electronic viewfinder, allowing users to quickly view and adjust a variety of shooting settings, including ISO sensitivity, AF-area mode, and Picture Control, all while looking through the viewfinder.

The bodies are compact, while boasting a firm grip that is easy to hold, and buttons such as that for the subselector, AF-ON, ISO, and exposure compensation are all placed so that they can be operated swiftly and easily. Additionally, a display panel has been placed on the top part of the camera, where information about settings can be displayed, same as with high-end digital SLR camera models.

The cameras utilise extensive colour depth and twelve-stop, 1,300% dynamic range to record a wealth of tone information from highlights and shadows for more effective colour grading. Timecode support makes synchronising video and sound to footage recorded across multiple devices easier. Additionally, the control ring built into NIKKOR Z lenses can be used to quietly and smoothly adjust settings such as aperture and exposure compensation.